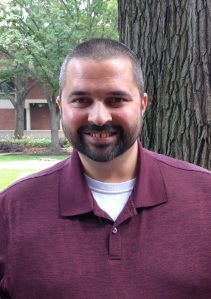 paper.  It taunts you.  It knows you can’t do it.  It erases every budding idea you have and replaces it with indecision.  It’s the ultimate bully–the one who manifests your fears with more efficiency than Pennywise the Dancing Clown.  You’ve lost any ability to be rational at this point.  You know you’ve faced this demon before and made it through, but you’ve convinced yourself you won’t be able to do it again.  This will be the end of you.  This will be the first time you’ve failed to turn in a paper, or—even worse—you’ll end up stringing together an essay of words so incoherent that everyone will finally find out you’re just an imposter.

That worst-case scenario never comes to fruition, of course, but it sure feels like it will sometimes.  We find a way to get through it, and the world keeps turning.

I’ve come to believe that the roots of this struggle are based in creativity.  More specifically, our doubt-ridden self-image about our creative talents.  If we have convinced ourselves that we are not creative, then it makes sense that we’d have difficulty designing that eye-catcher the beginning of our paper deserves.  It makes sense that we would look at polished or published writing and be unable to picture ourselves producing it—when the words feel so good, it’s more appropriate to call it a “creation” instead of a text.  Writing like that must have been fashioned by someone who won the creative gene lottery, we might think.  This creativity is not limited to fiction writing or poetry; its presence is just as ubiquitous in well-written academic work as well—we feel the sting of its absence when we can’t come up with a compelling thesis statement or find incontrovertible evidence in our research.  Even pallet-wood projects on Pinterest and sugar-cookie decorating on Instagram haunt our creative confidence.  How can I possibly create if I’m not creative?

It’s important to recognize that all writers have faced that empty-page paralysis at one point or another.  It’s even more important to recognize, however, that practiced writers have found strategies for dealing with times like these. We’ve accepted it as a part of the process, and have found solutions that work for us.  Some writers make a pointed effort to temporarily abandon the writing for a little while, refocusing their brains on something unrelated until they feel ready to give it another try.  Some find solitude, others seek out company.  If writers are constantly finding themselves in this struggle, they might ask if they are trying the same ineffective strategies over and over.  If so, I encourage them to try doing something different and see how that works.

The longer I write, the more I’m comfortable that I’ve found an effective strategy for me.  If I just start writing something, even if it’s horrible, it will eventually evolve into a final product.  I’m not always satisfied with what I write, but these are first drafts we’re talking about here.  They’re allowed to be horrible.

I will admit that it’s more complicated than just getting words on the page.  Word production does not automatically create a well-written paper.  Strategies may get you started, but what use is that if none of it has that unique, creative zing?  It boils down to either accepting that certain lucky people are born with a creative gene, or accepting that creativity, like having any other skill, takes practice and hard work to develop.  Subscribing to the former absolves the writer from any responsibility.  But the latter makes the writer accountable for improving, which is a scary prospect.  If creativity is indeed a product of practice and effort, then that includes a heavy implication of failure.  For writers, the fear of failure is often what keeps the page blank to begin with.

However, I’m convinced it is a struggle worth fighting for.  Once writers accept that it will take work, they can focus on combining strategies with perseverance.  It’s the confidence (whether real or faked) that the words will eventually come to you, and a willingness to embrace the discomfort of labor.  It takes patience, comfort with failure, and a commitment to pushing through the block.  It’s not a problem limited to non-professional writers.  In his book On Writing: A Memoir of the Craft, Stephen King compares writing not to “creative fluttering,” but to blue-collar labor such as plumbing and driving long-haul trucks (153).  (I know that this is my second King reference of the post; I offer no apologies.)  Common metaphors we use to describe this kind of toil are just as pitiless as you might expect: “putting your nose to the grindstone” and going “off to the grind.”  Both examples express this undertaking as a prolonged and drudging effort.  Even video gamers, when faced with challenging goals that require lots of time, effort, and perseverance, call the act “grinding.”  The origin of using “grind” in these metaphors is a reflection of two inventions of production: a vertical, spinning stone for knife sharpening, and the giant stone wheels used to pulverize grain into flour in watermills.  These examples represent the unforgiving nature of this approach, and in all fairness, sometimes the grind is tedious and exhausting.  But the metaphors also represent a connection between writing and the efforts of other disciplines.  These commonalities highlight a stark truth: those who find success usually have to work very hard for it.  Creativity therefore, and its subsequent creation, are choices.

This all means that, when faced with a writing block, the best way of fighting through it is committing to fighting through it.  The writing that looks easy for other people is less likely a product of a lucky birth and more likely the result of a practiced skill.  That practice means that once you have a merely acceptable idea of what to write, you keep grinding until you create something you’re proud of.  It won’t come easy.  It will be frustrating.  Failure is a real possibility.  But just like anything that is challenging, you will be rewarded when you work for it.

3 thoughts on “Creative by Choice: Persevering through Doubts and Droughts”