Thursday night, as part of Welcome Week for new first-year students, the Library opened its doors for games, performances, art, and food for a night called “Kick Back in the Stacks.” At the University Writing Center we had a caricature 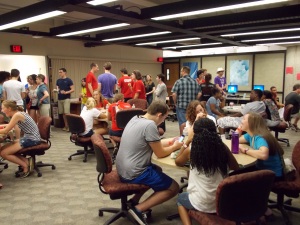 artists, cookies, art projects about writing, and word-related games from “hangman” to “who am I” to “tag-team Scrabble.” As the photos on the page show,   we had a packed house – and definitely a good time.

We also had an open

blog post that a number of people contributed to during the night. We left the post open for people to memories about writing. Below is the question we asked along with some of

the memories people shared. It’s always fascinating to see what moments stick with people as encouraging, inspiring – or sometimes frustrating – their ambitions as writers.

Here is the question and some of the responses:

What’s a memory you have (positive or negative) about writing?

We thank these writers for their contributions, and everyone who came to the Writing Center Thursday night (and all the Writing Center staff, present and past, who helped out.) It was a fun way to kick off the year and we hope to see everyone back during the semester so we can help them make their writing as strong as possible and create some positive memories of writing at UofL.