I first read Shel Silverstein’s poetry when I was in elementary school. I loved his doodles, and I loved his rhymes. When I got older, I loved his cleverness. Silverstein could tell a good story in only a few words and could capture the minds and hearts of children and adults alike while doing so.

Maybe you’ve heard that Silverstein’s writing is childish or not up to par with the poetry greats, like Yeats or Shakespeare, but I’m here to show you that he can actually tell us quite a bit about writing. Let’s start by looking at one of his poems about a writer. 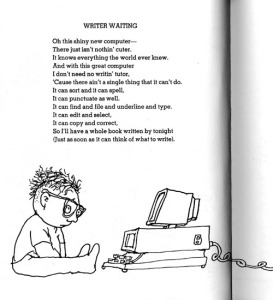 The poem, paired with a sketch of a young child staring at his computer screen and waiting for something to happen, is very clearly about computers and writing. I don’t know about you, but often when I write, this is a pretty accurate representation of me. Even though I’m in grad school, I feel like a kid who has no idea what she’s doing, and sometimes I stare at the screen, hoping for a miracle.

We could go down many rabbit holes about using or not using “standard English” or about all of the rhetorical choices Silverstein makes in his argument that computers are actually not the key to writing, but this time we’re going to focus on the following:

The narrator says that he doesn’t “need no writin’ tutor” because the computer can do it all. It can check spelling by showing you the ominous red squiggly line and grammar by showing you the questioning green squiggly line. Sometimes these lines are useful and alert you of typos or sentence fragments. But other times they’re wrong. And sometimes they don’t catch the mistakes. For example, my computer did not use a green squiggly line for my previous two sentences, even though they are technically fragments. Those sentences are examples of using your “creative license” to make a point by putting more emphasis on the sentence. 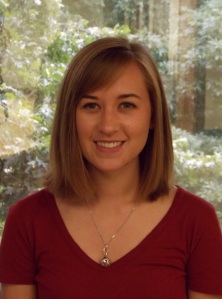 Silverstein uses his creative license in most of his poetry. A few examples in his poem are, “It can sort and it can spell,/It can punctuate as well,” which the computer doesn’t mark but is a run-on sentence, and “(Just as soon as it can think of what to write),” which the computer does mark as a fragment. Both of these examples rely on their syntax to create the rhythm of the poem, or how we hear and read it. Try reading it aloud while paying close attention to the syntax. (Remember to use longer pauses for periods than for commas.) If Silverstein paid too much attention to the computer, he wouldn’t have been able to create this rhythm or achieve his meaning.

My favorite part of “Writer Waiting” is my second example of Silverstein’s use of creative license. It is the last line, which is in parentheses as if it’s an afterthought or something the narrator doesn’t want to admit. It reads, “(Just as soon as it can think of what to write).” Two words in this line are key: “it” and “what.” “It” puts an emphasis on the computer, while “what” brings our attention to the content of the paper, though the poem mostly focused on the mechanics, like punctuating and spelling. The computer, of course, cannot create the content for us, even though we want it to. Writing is not just about the tools you use; it is about you and your thoughts.

Writing also does not have to be a solitary act. In fact, I think writing is more fun when you talk to other people about it. Here at the University Writing Center, we can help you decide if the squiggly lines offer the best choice, if you should deviate from the computer’s options, and if it’s the best time and place for you to use your creative license in writing to make your point. Most importantly, we can discuss your ideas for your paper. The writing center is here to help you not look and feel like the kid in Silverstein’s drawing.

One thought on “What can Shel Silverstein’s “Writer Waiting” teach us about writing?”