I should, of course, back up briefly and say that I have always felt that Writing Center work is both important and effective. In fact, I even wrote a blog post about it. Rarely, however, are we as consultants given the opportunity to see Writing Center work in its most idealized form. If consultants are lucky, they may work with the same student several times on the same paper. Really lucky consultants might see the same student throughout an entire semester working on multiple projects. What’s great about either of these scenarios is that they let us see the effects of our work. How do students implement the feedback we give them? How do ideas that manifested themselves during writing center consultations then appear in reiterations of the student’s writing? What might we do to better serve this student in the future? When you see the same client multiple times, you can begin to answer these questions and reflect on not only the

work you do as a consultant, but also on the effectiveness of that work. Unfortunately, more often than not, writing consultations don’t extend past a single visit. Students might seek feedback for only one draft or come to the Writing Center to discuss writing in only one of their disciplines. While these sessions are no doubt fruitful, as consultants, we can only imagine what the students did when they got home and returned to their writing.

I have been a consultant for both kinds of sessions. I have been left to wonder whether I had been helpful to a student. And I have been able to see just how helpful I’ve been to students. But it wasn’t until last week, during University Writing Center’s first ever Dissertation Writing Retreat, that I was able to see just how powerful Writing Center work, in its most idealized form, can be. The Dissertation Writing Retreat was a week-long intensive writing experience for ten doctoral candidates representing five different disciplines on campus. Participants came in at 8:00 AM each day and would write for approximately 2.5 hours. They would also engage in workshops covering relevant topics such as writing a literature review or overcoming writing obstacles. Then, after a break for lunch, participants would return to writing for about another 1.5 hours before meeting with a writing consultant (like me). Consultations lasted an hour and participants met with the same consultant each day. You can begin to see here how this experience represented ideal writing center work.

First, we had time. An hour is a lot of time to discuss someone’s writing. More time is always great, but an hour gives you time to read the writing, discuss the writing, and, if the participant so desires, begin rewriting. But this is just a logistical advantage. The other advantages spoke to some of the theories of Writing Center work that I never necessarily got to see in action. For example, a common conversation in writi

ng center scholarship revolves around discipline-specific tutors versus general tutors. While discipline-specific tutors are able, often, to speak to the content of a student’s writing, general tutors may be more limited in that area. General tutors offer the advantage, however, of needing the student writer to explain his or her content to a reader unfamiliar with the discipline. In an ideal world, the process of explaining content makes the content more clear not only to the tutor but to the student herself. In explaining the information to someone not already familiar with the content, the student might be forced to think about her content in new ways. If nothing else, she will likely have to make connections within her content far more explicit than she might with someone who is already familiar with it. And, while this all sounded good in theory, for me as a consultant, it was sometimes hard to know if it was true.

Enter the retreat. On the final day of the retreat, participants shared with one another some of the benefits from participating in the retreat. One benefit that came up repeatedly regarded just how helpful it was for them to have to talk about their projects to people outside their fields. Each participant remarked on how such conversations clarified their understanding of their projects and, by association, how they wrote about those projects.

Gaining a stronger testimony in the power of the general tutor was only the beginning. I also was able to see just what can happen when someone gets feedback on their writing not only the same day they wrote it but also on a consistent basis (in this case, daily). I had the privilege of working with two doctoral candidates from the Kent School of Social Work. Each day, we were able to meet and discuss the progress they had made. After each session, we would set goals for the following session. They would then be able to spend time writing knowing that they had goals in mind and that we would be discussing these goals. This isn’t to say th 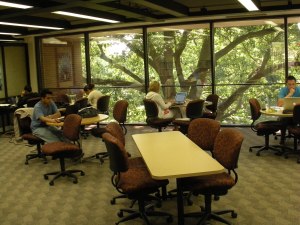 at the sessions were prescriptive. At the end of the day, my job was to help these participants in whatever capacity they needed me in. However, setting goals like these meant that each day, we could start the conversation by reviewing what we had done the day before and by seeing how they had progressed based on that previous work. For the participants, this proved to be an important aspect of the retreat. Many commented on the fact that these daily sessions helped them stay on task and motivated. They were also able to discuss their writing when it was still fresh. If a consultant asked them why they made a specific choice in their writing, for instance, they probably could remember why.

But for me as a consultant, the experience was equally as valuable as it was for participants. I was able to see almost immediately which strategies I used as a consultant were working and which ones needed to be adjusted or abandoned altogether. Moreover, these strategies shifted from one participant to the next. In other words, the reflection I did as a writing consultant, while often generalizable, was also specific to the individual participant. By seeing these participants every day, I know that by the end of the week, I was a better consultant than when I started. I would like to think that during my tenure as a Writing Center tutor, I have always improved but it is hard to know for sure. Only with daily reflection in relation to a returning participant was I able to feel certain about the ways I was being either effective or ineffective.

There are certainly other ways that being a consultant during the retreat affected my views on Writing Center work but many have been, or will be, expressed by others. For example, Dr. Bronwyn Williams, Director of the University Writing Center, has already discussed some of the great things we saw come out of the retreat. Likewise, it is my hope that both participants and consultants from the retreat will be motivated to comment or write blog posts of their own. For now, let me simply end by saying this: Writing Center work works. If you don’t believe me, ask Naouel Baili, Tanvir Bhuiyan, Brynn Dombroski, LeAnn Bruce, Alex Cambron, Anis Hamdi, James Leary, Mohammadreza Negahdar, Zdravko Salipur, or Charlos Thompson—our retreat participants. Or, talk to one of the consultants: Ashly, Bender, Robin Blackett, Laura Detmering, Becky Hallman, or Jennifer Marciniak. While I am sure we all had different experiences, I am also certain that we each took something positive away from this week. While my time in the Writing Center is now up, I look forward to seeing what the future brings to the University Writing Center. My hope is that the kind of work that happened there this past week will continue and that both new clients and new consultants will have the opportunity, like I did, to see writing center work in its idealized form. It’s empowering.